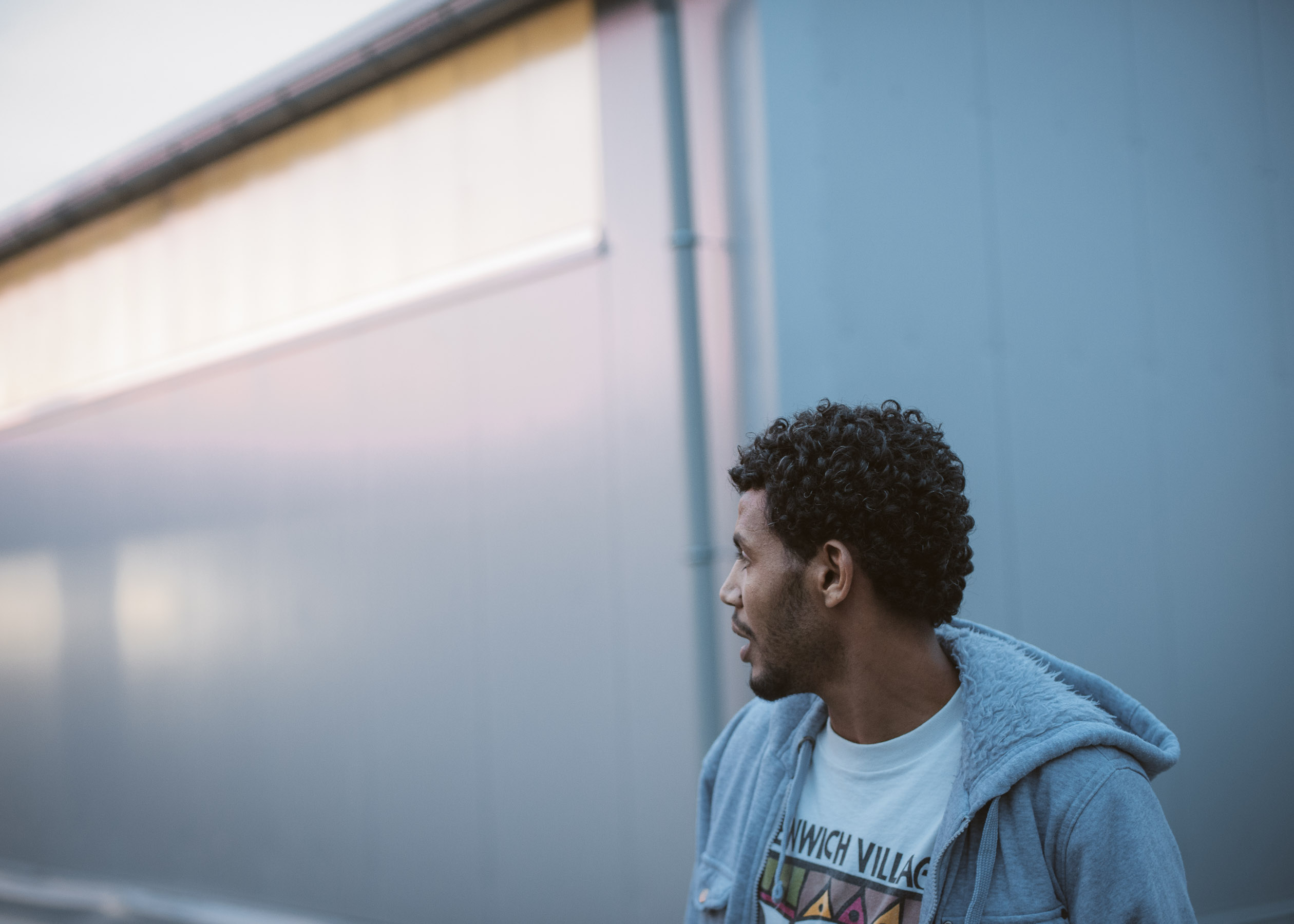 The project explores the topic of migration during the so called ‚refugee crisis‘, a peak period in terms of numbers, in Germany between September 2015 and April 2016.

The inquiry is devoted to displaced migrants, which I photographed upon their arrival, and records different stages of hope and despair throughout a journey towards an anticipated, improved future. It also reflects on authorities‘ interventions, administrative responses and social interaction within our fragmented contemporary society.

The work is comprised of photographic prints, video and a newspaper publication, which includes photographs and various texts collected from both media-sources and personal archives. 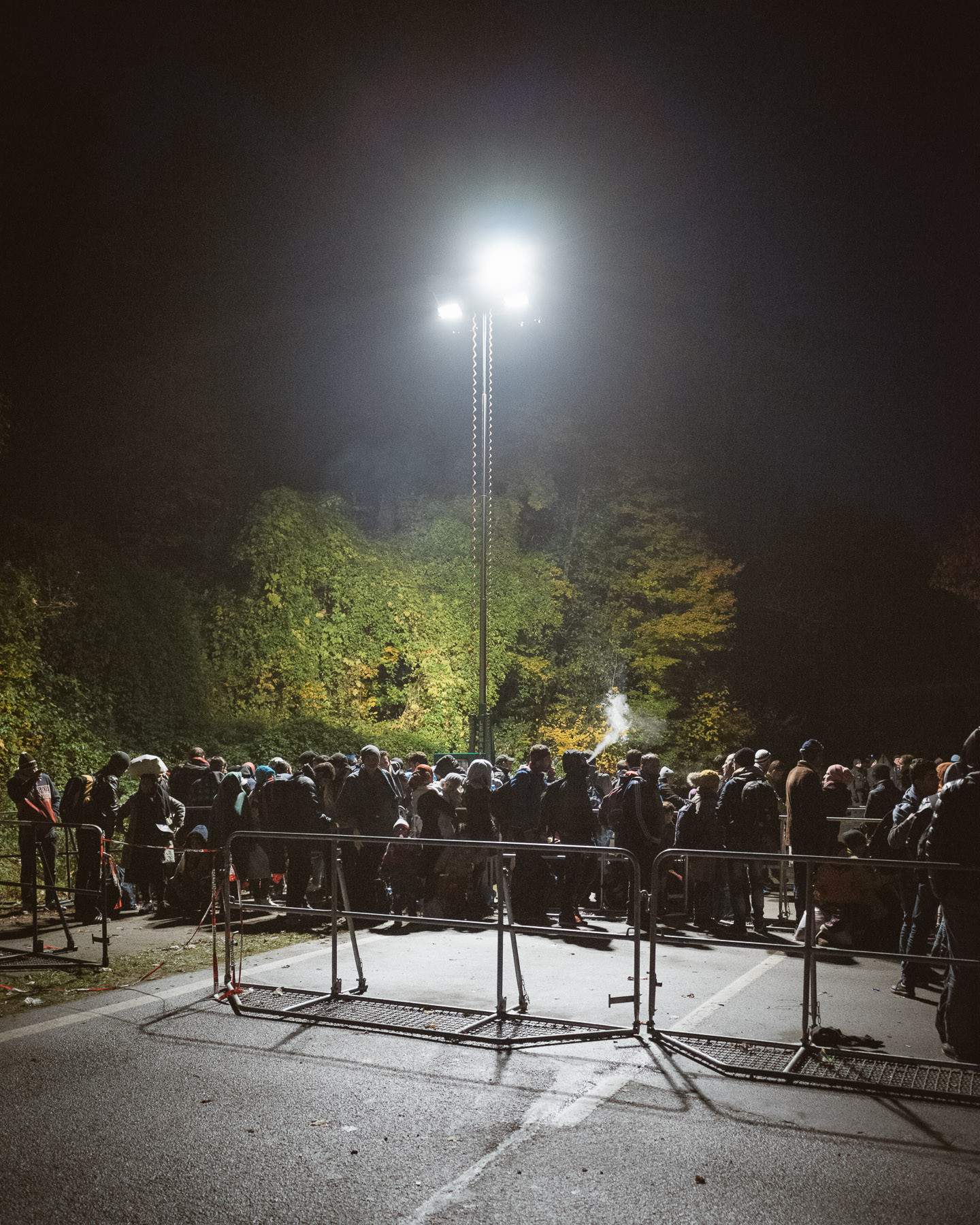 As Hungary sealed off its land border with Croatia in September 2015, about 100,000 on the Balkan route pass through Slovenia. Austria using buses to move refugees and migrants from the Slovenian borders directly to the German border; Achleiten border crossing, October 2015.

THE TERM "REFUGEE" SHALL APPLY TO ANY PERSON WHO [...], OWING TO WELLFOUNDED FEAR OF BEING PERSECUTED FOR REASONS OF RACE, RELIGION, NATIONALITY, MEMBERSHIP OF A PARTICULAR SOCIAL GROUP OR POLITICAL OPINION, IS OUTSIDE THE COUNTRY OF HIS NATIONALITY AND IS UNABLE OR, OWING TO SUCH FEAR, IS UNWILLING TO AVAIL HIMSELF OF THE PROTECTION OF THAT COUNTRY

United Nations High Commission for Refugees, Convention Relating to the Status of Refugees (1951), Article 1, [A(2)]

Haßler, Jost, Maurer, Kruschinski: On the accuracy and balance of media coverage during the “refugee crisis”, Publizistik 2018, Abstract, ISSN: 0033-4006 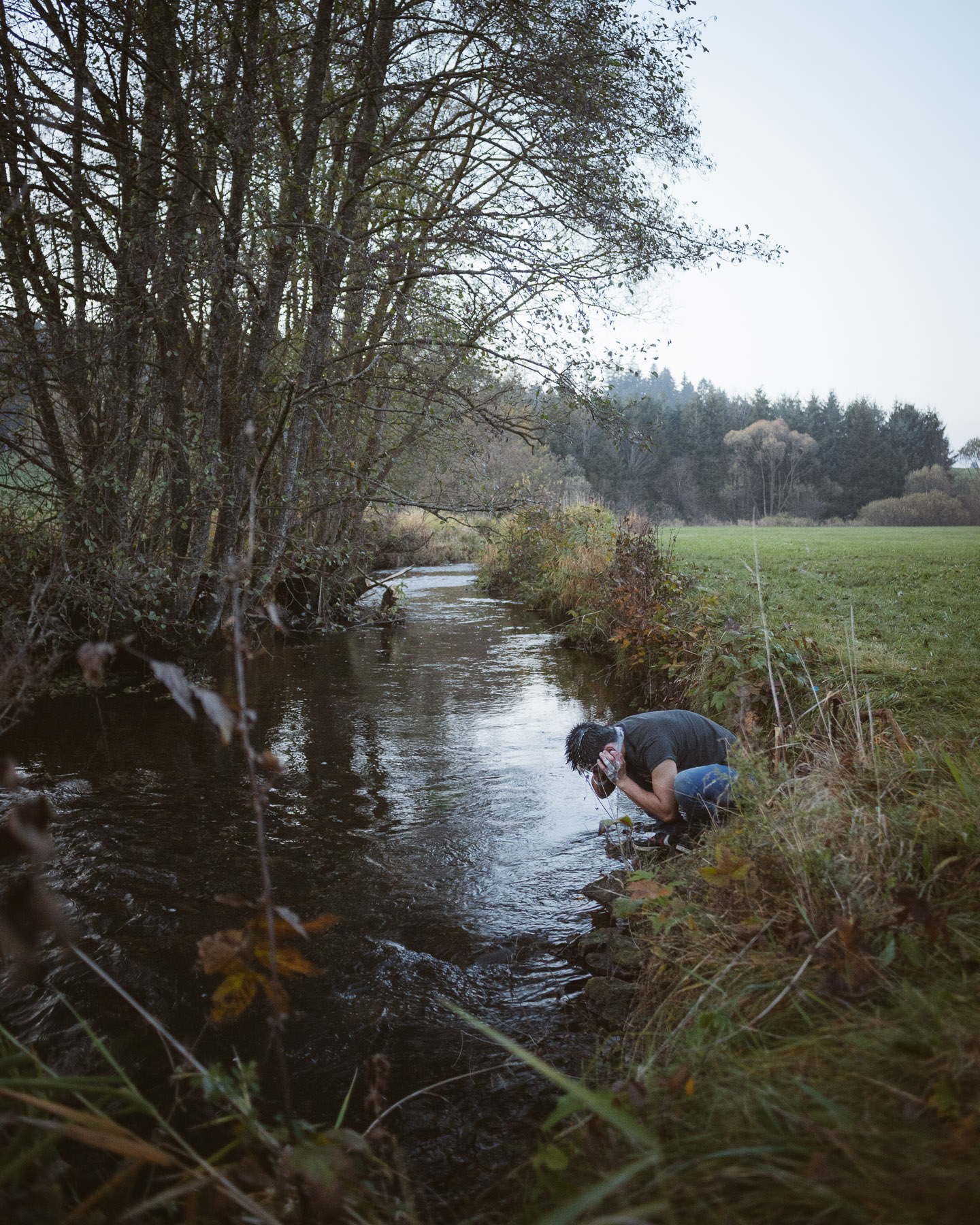 Mohammed from Iraq washing his face and hair in the Osterbach (creek). About 62,000 refugees and migrants walk across the Germany-Austria border at a hilly forest area in Lower Bavaria while the place becomes a focus of the media within German and international coverage; Wegscheid border area, October 2015. 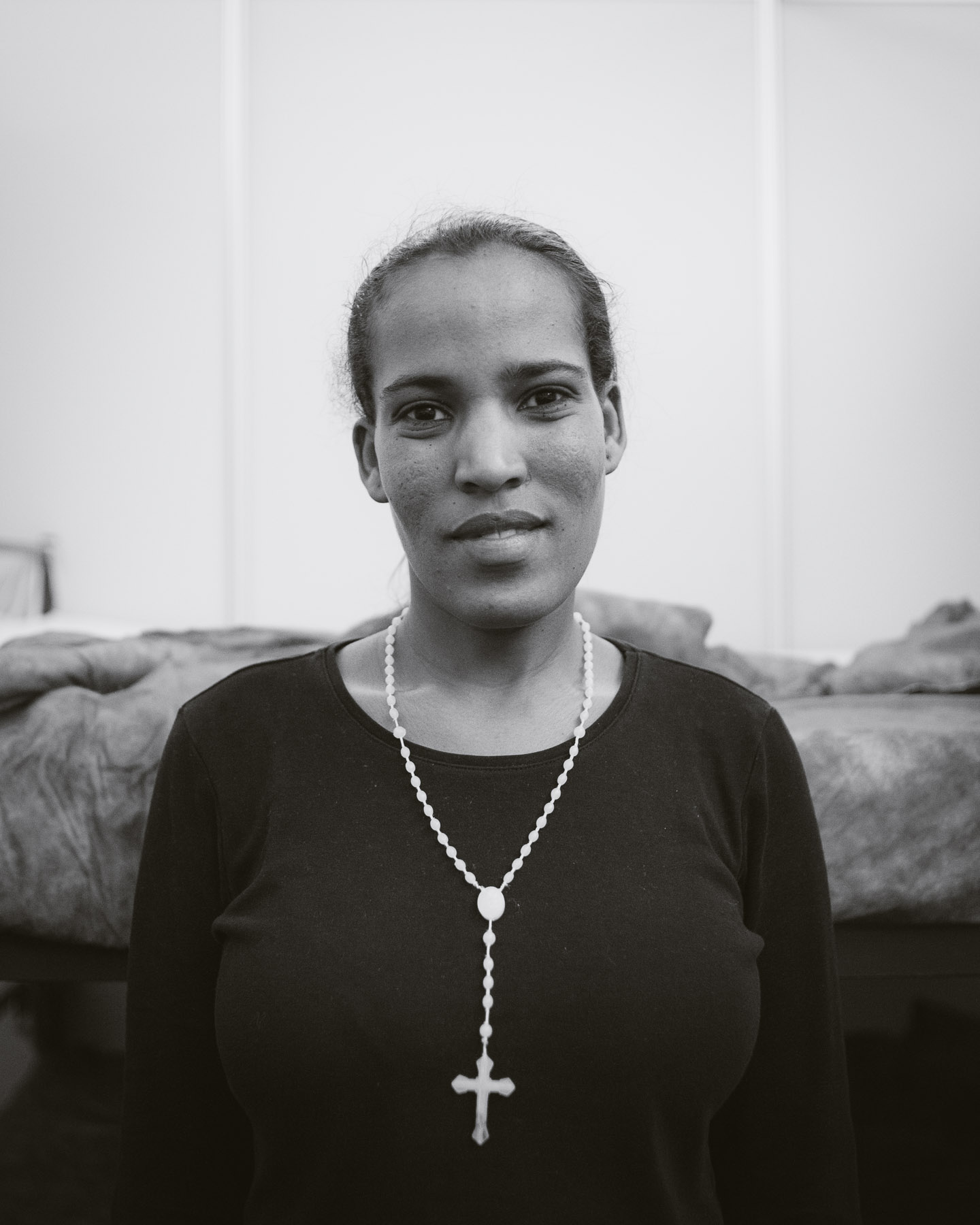 Yeshi fled from Sudan with her husband Ifaa. She is one of only two women in the camp. And she is pregnant; AWO reception center, Nuremberg, April 2016. 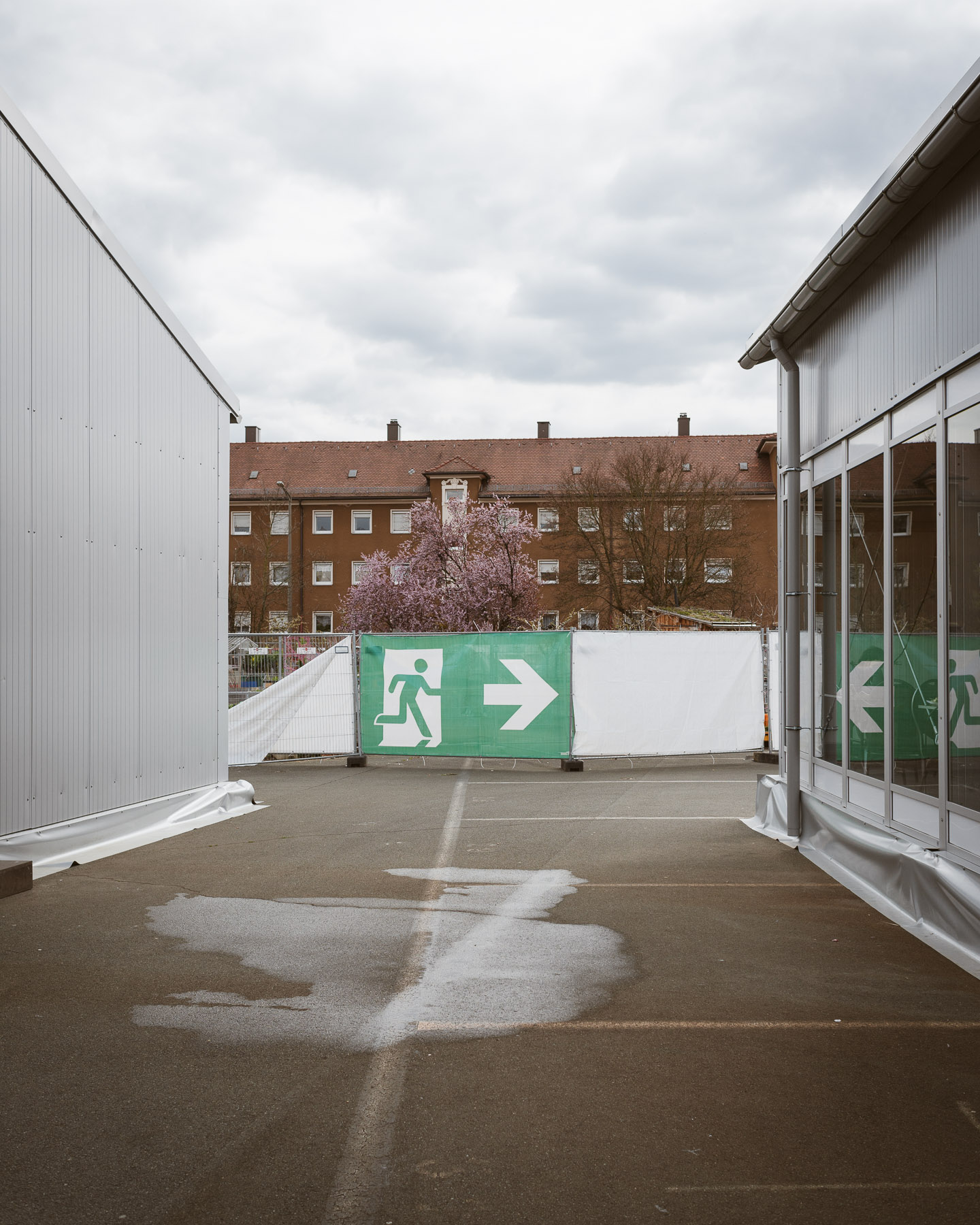 On the parking lot of a former department store two large halls are assembled with sanitary containers and a makeshift dining room. At peak times, more than 420 people have lived here, most of them awaiting asylum status. AWO reception center, Nuremberg, April 2016. 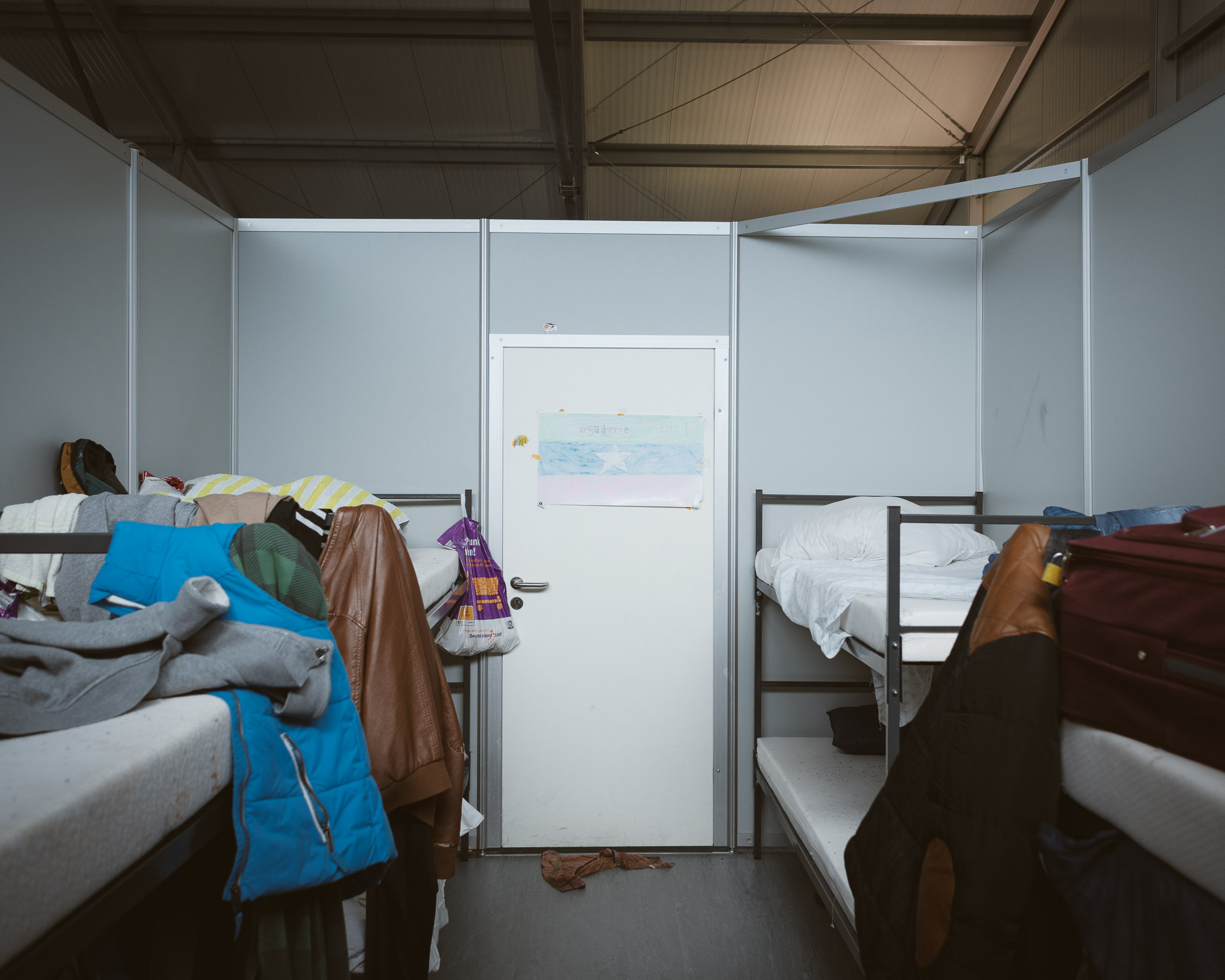 Eight-bed-cabin shared by Somali refugees from Ogaden, a territory at the view time claimed and dominated by Ethiopia; AWO reception center, Nuremberg, April 2016.

DEVELOPMENT OF ANNUAL ASYLUM APPLICATION NUMBERS IN GERMANY SINCE 2010 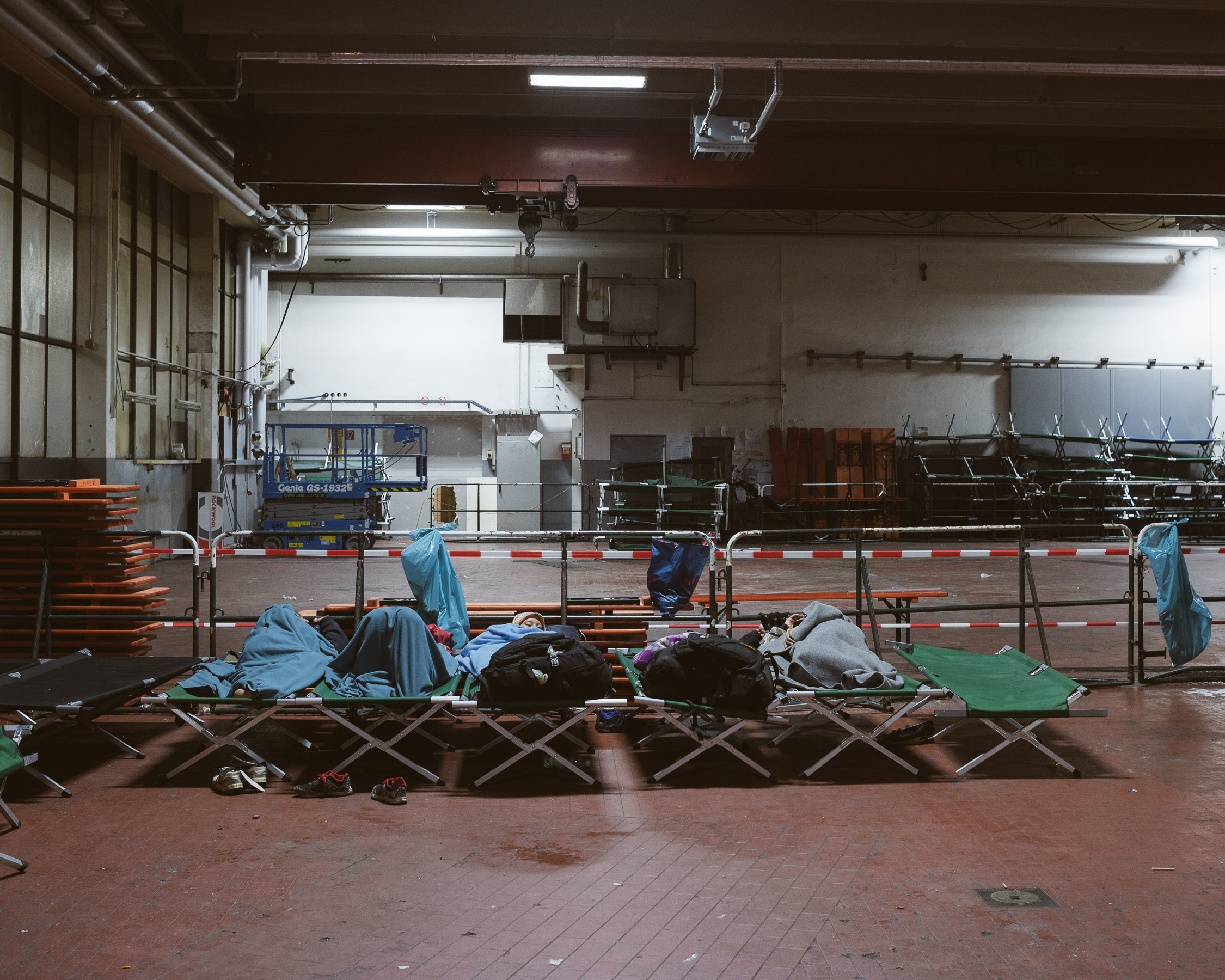 The hall is about the size of a soccer field with hundreds of camp beds. The arrivals are assigned to different waiting areas and might stay for a couple of days. From there, a bus will take them further - either to another reception center in Lower Bavaria or to the train station for further transfers to other German federal states; Paul-Hallen, Passau, October 2015. 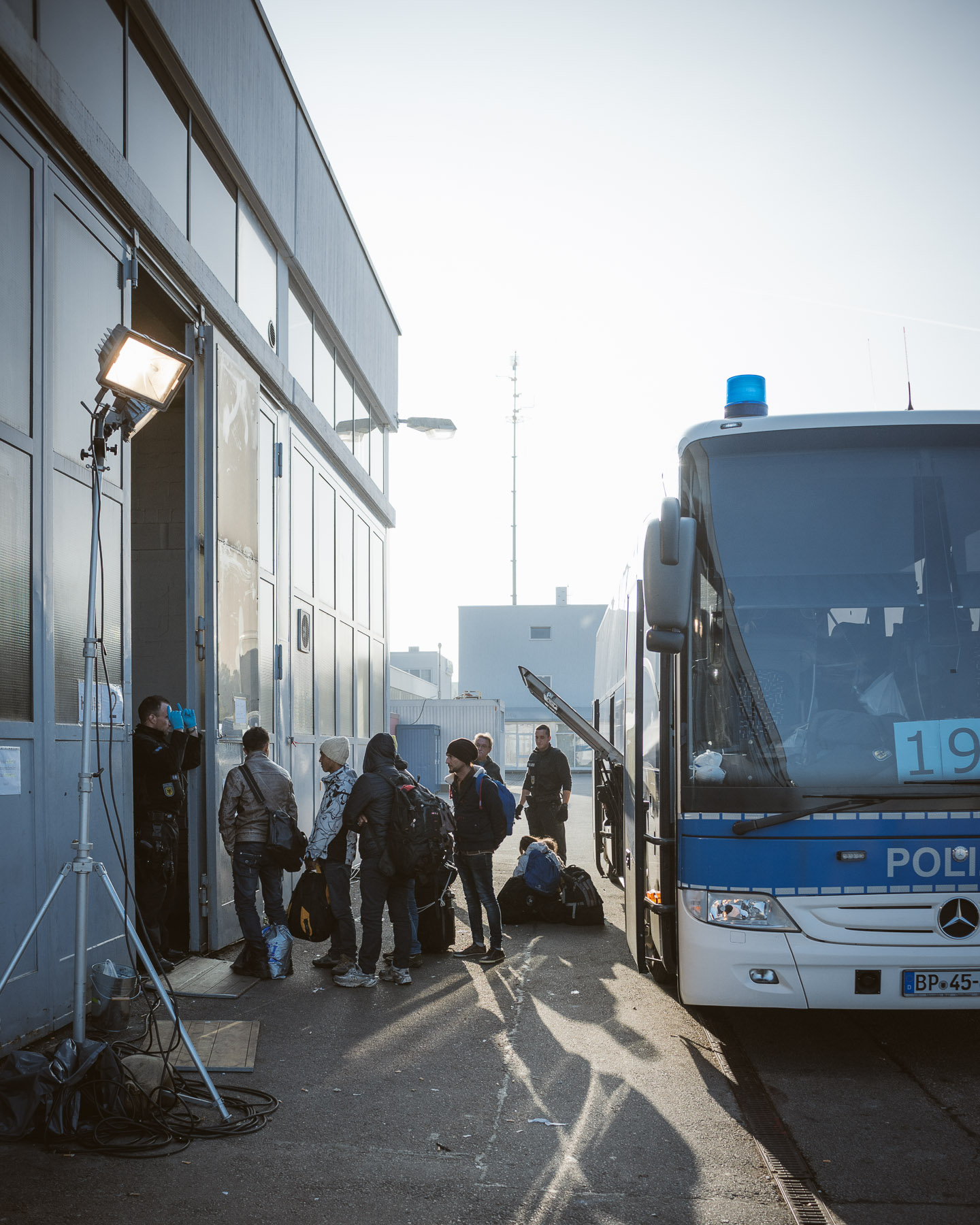 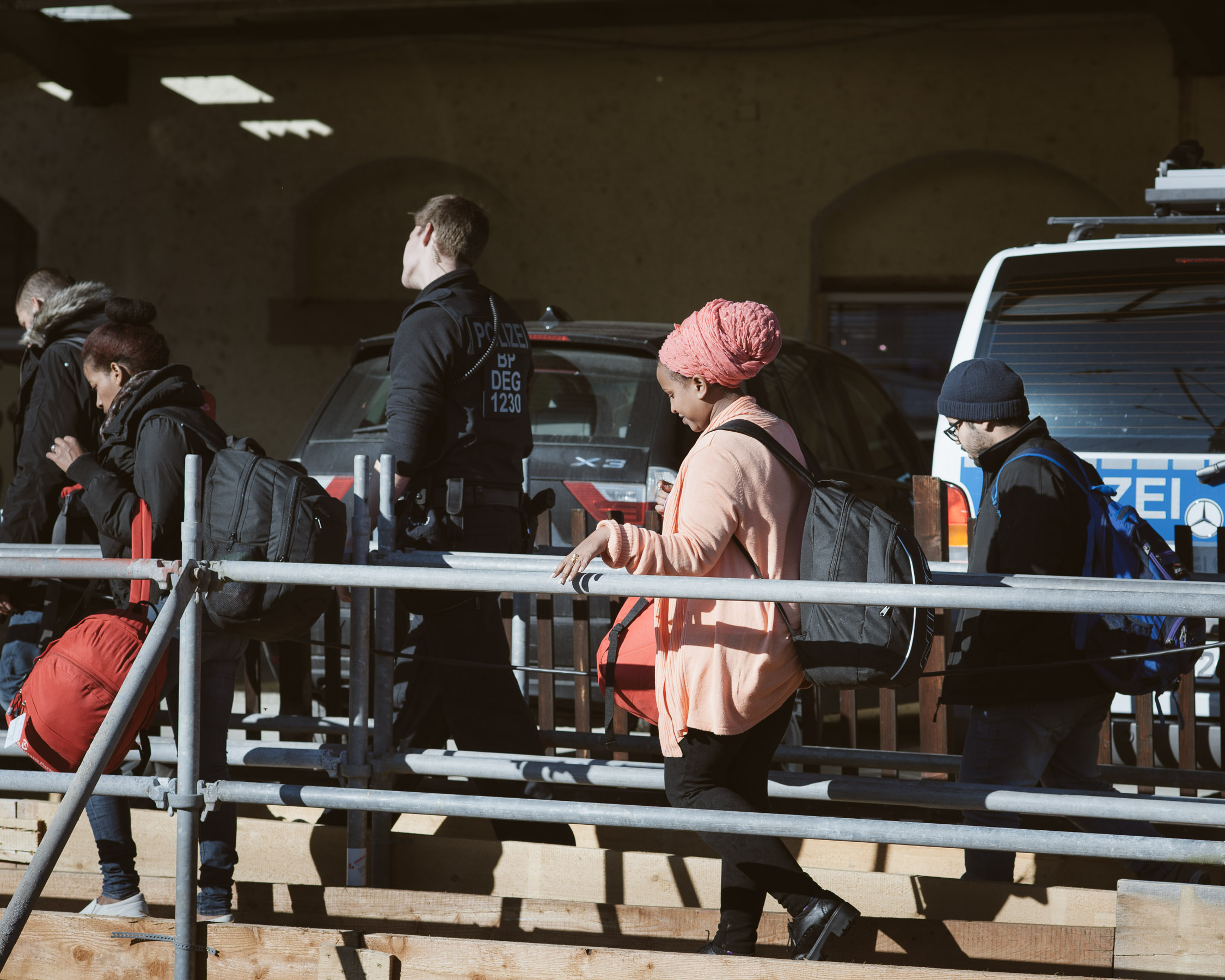 Groups of migrants and refugees are convoyed by federal police for onward journeys with special trains to other German federal states; central train station, Passau, October 2015. 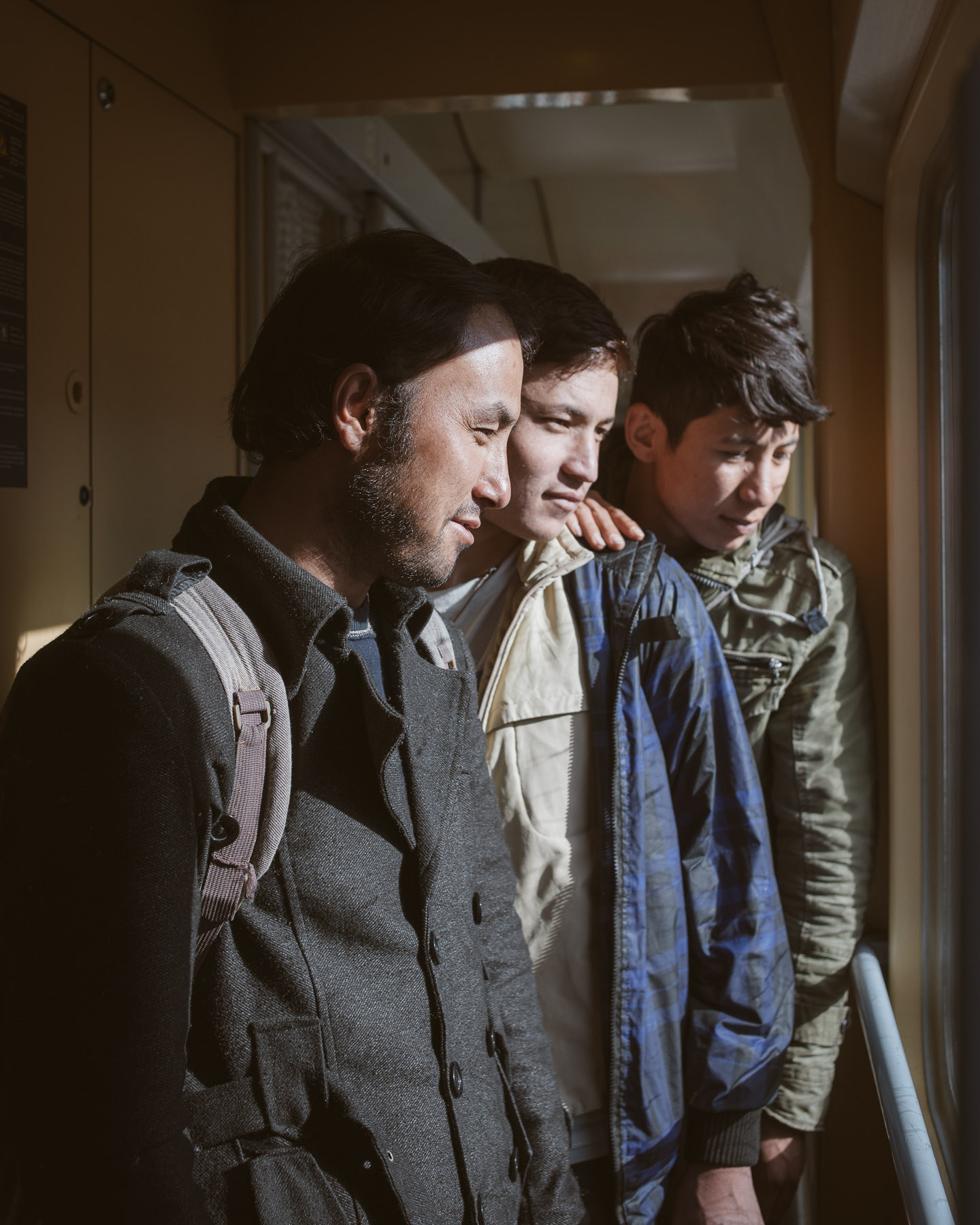 Tarek, Nabil and Lâmi from Afghanistan in a special refugee train to Cologne. During the last days of October 2015, an average of more than 6,500 people arrive in the Passau border area every day. To create capacities at the local emergency reception centers up to four special trains provided by Deutsche Bahn (German Rail) leave Passau per day to distribute more than 2,000 people to other federal states; October 2015.

DEVELOPING REGIONS HOSTET 86 PER CENT OF THE WORLD’S REFUGEES UNDER UNHCR’S MANDATE. AT 13.6 MILLION PEOPLE, THIS WAS THE HIGHEST FIGURE IN MORE THAN TWO DECADES. THE LEAST DEVELOPED COUNTRIES PROVIDED ASYLUM TO 4.2 MILLION REFUGEES OR ABOUT 26 PER CENT OF THE GLOBAL TOTAL. 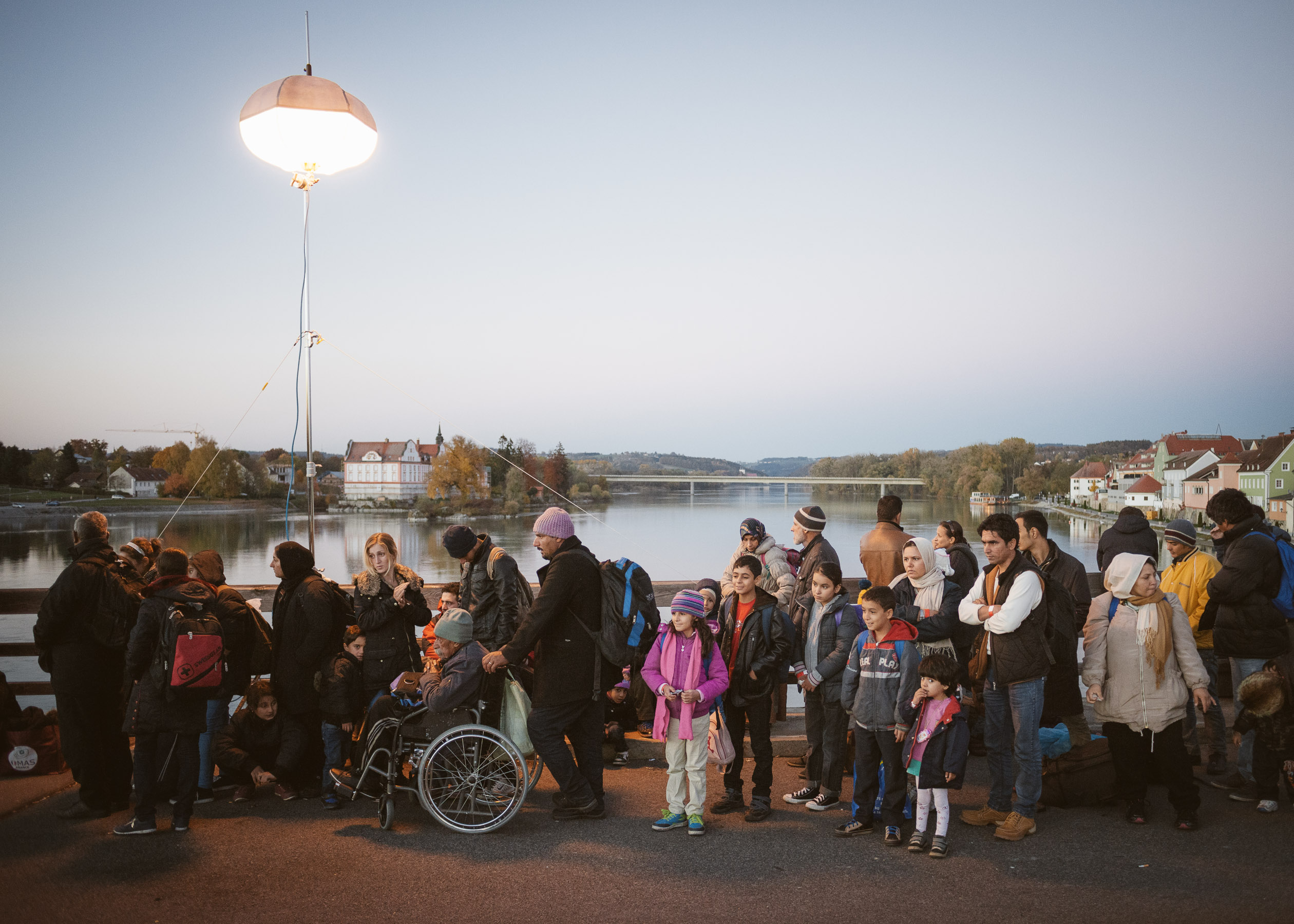 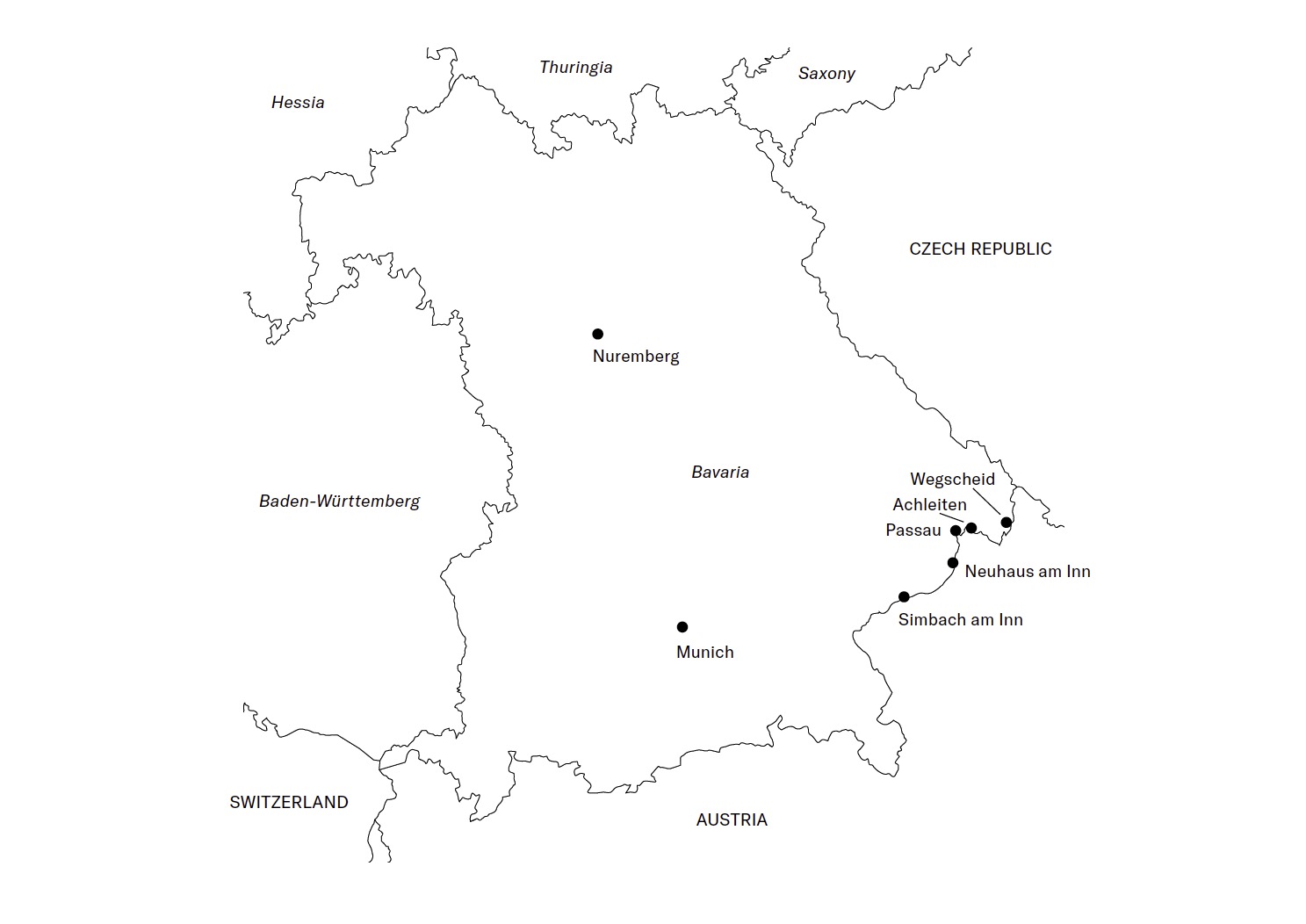 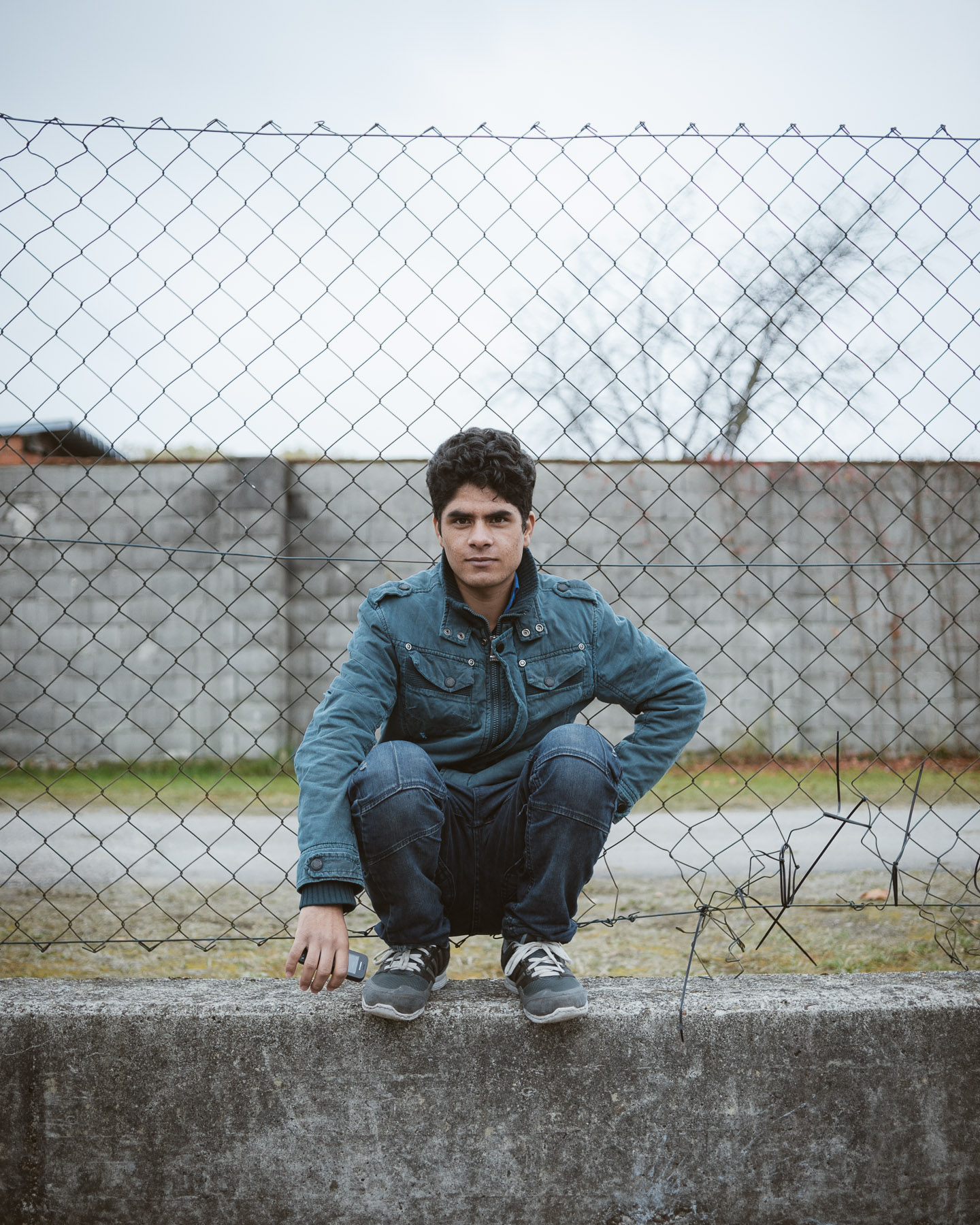 Moustapha from Afghanistan at a former Federal Agency for Technical Relief (THW) Austraße accommodation, that had been converted into an emergency shelter for refugees; Simbach am Inn, October 2015. 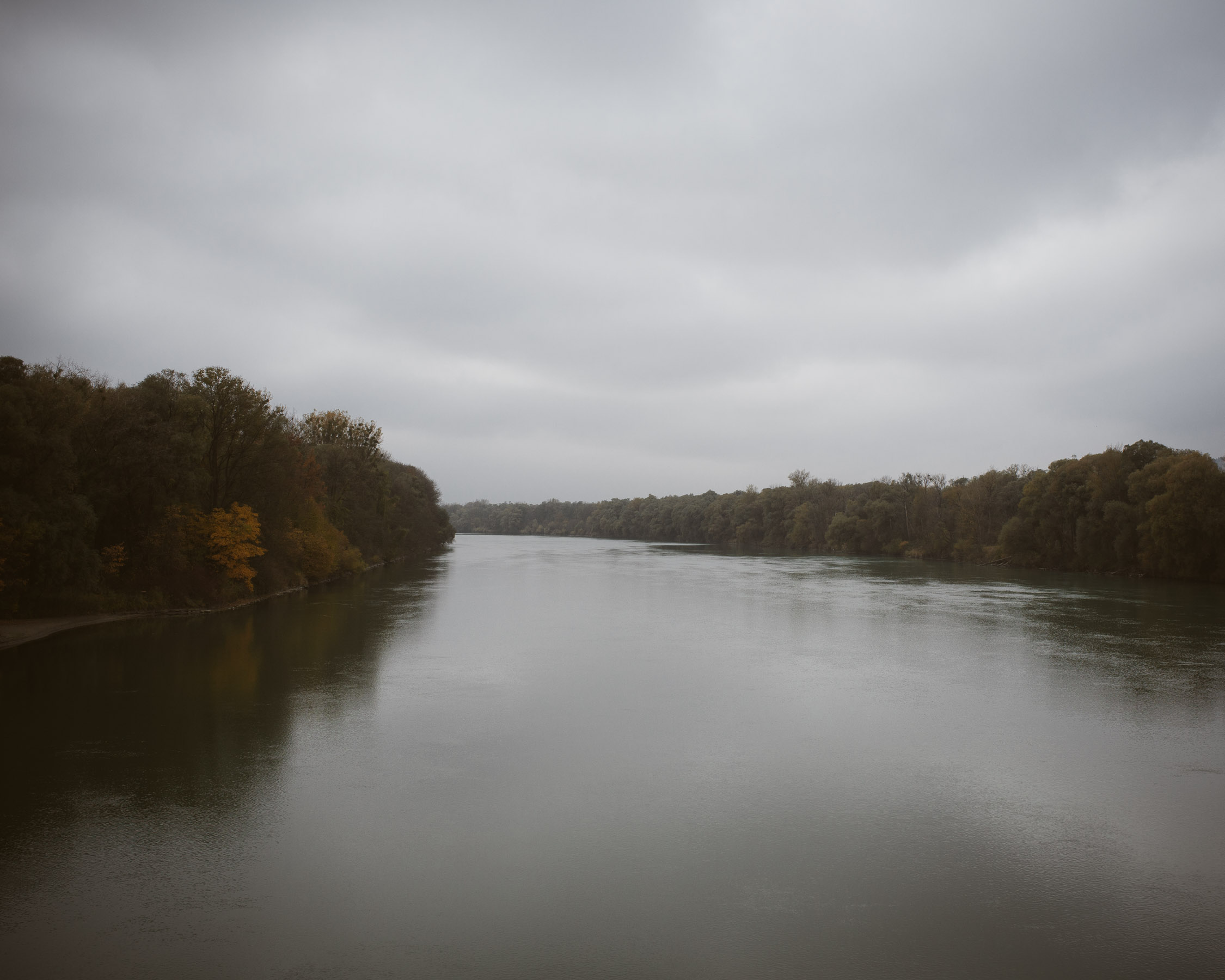 On Tuesday afternoon, 27 October 2015, two migrants jumped into the river Inn in order to quickly reach German territory. They underestimated the drift, but were able to hold onto a bridge pier. Water rescue forces then saved the refugees from the cold river. Suffering from hypothermia they were provided with medical care on the German side; River Inn, Simbach am Inn, October 29, 2015. 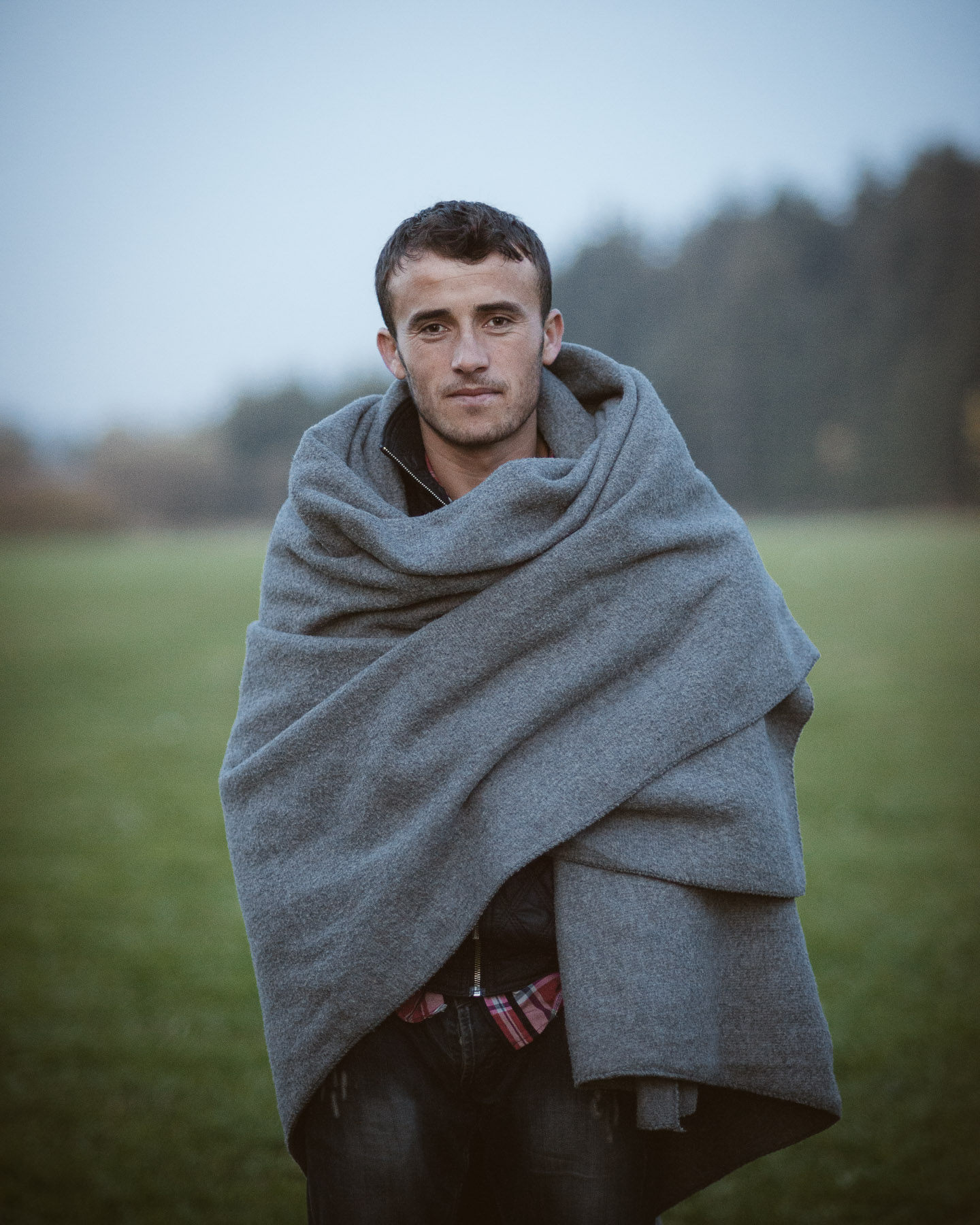 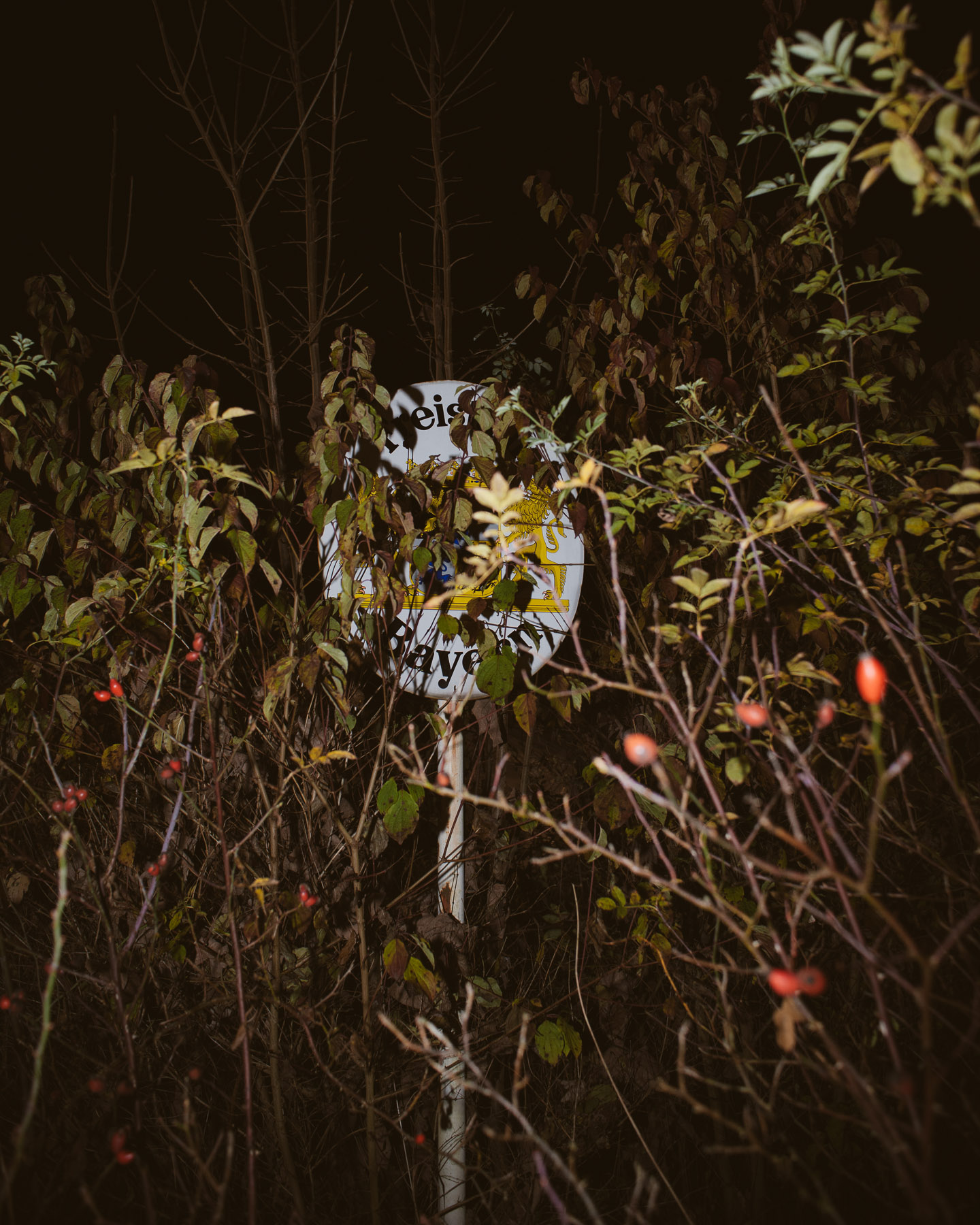 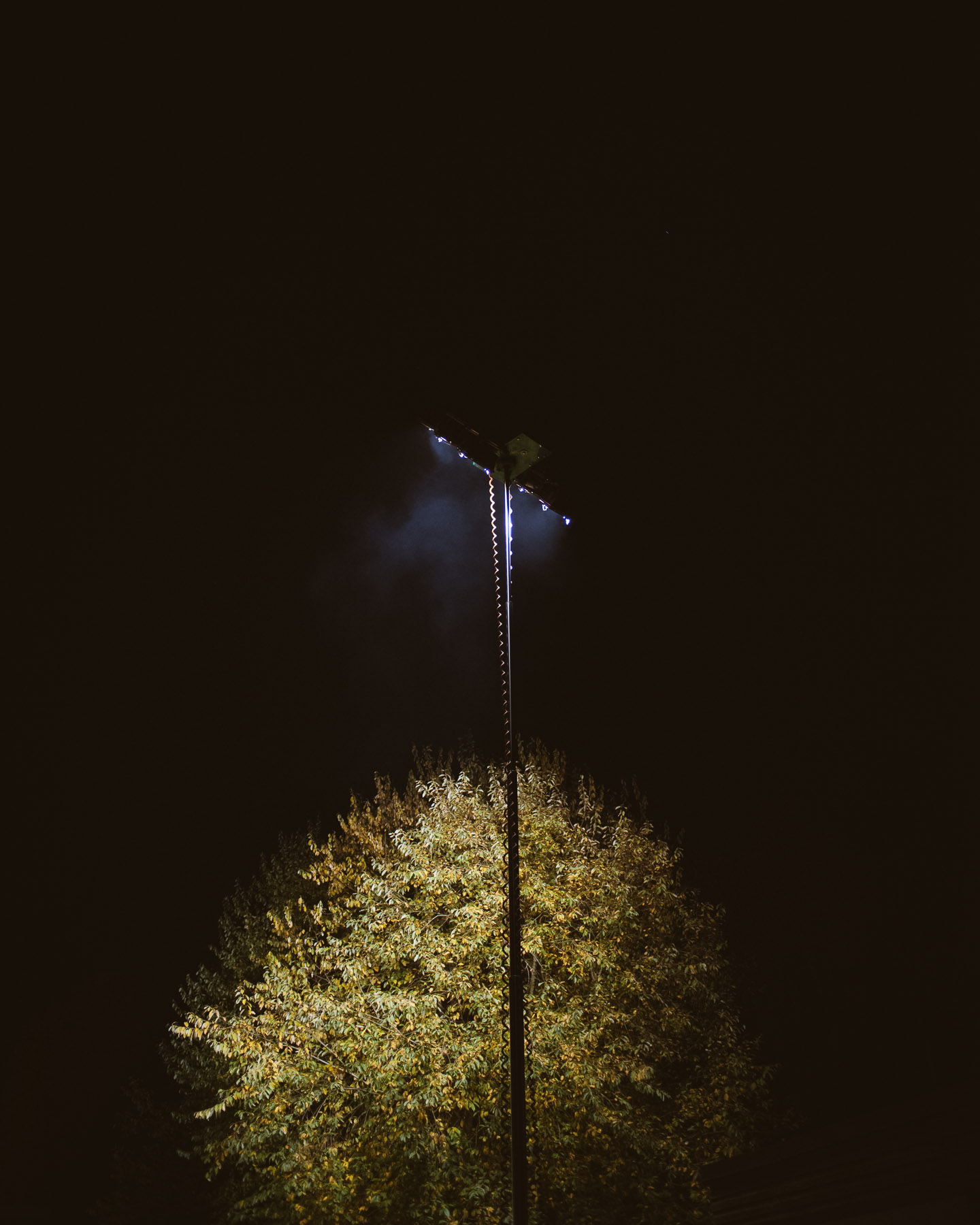 In 2015, an increasing number of people risked their lives to cross the Mediterranean Sea in search of safety and protection. More than 1 million people arrived in Europe by boat during the year, with 84 per cent from the world’s top 10 refugee-producing countries, including the Syrian Arab Republic, Afghanistan, and Iraq in the top three.

[…] The impact of the crisis was felt across the continent, due to the significant onward movement from Greece to countries in Western and Northern Europe through the Western Balkans route. During the summer and early autumn thousands of people were crossing borders across numerous countries.

[…] The refugee emergency in Europe tested asylum and reception systems in 2015, and illustrated the imperative of a comprehensive response, based on solidarity and responsibility sharing. Existing frameworks were in many instances unable to facilitate the management of the crisis or preserve the protection space in a sustainable manner. Numerous European countries responded to the crisis by unilaterally imposing greater restrictions on access to their territories. In particular, 2015 saw increased border controls and fences erected along borders between several countries in an effort to thwart the movement of refugees into their countries and across Europe. In addition, many countries passed legislation restricting access to asylum systems and placing limitations on family reunification. 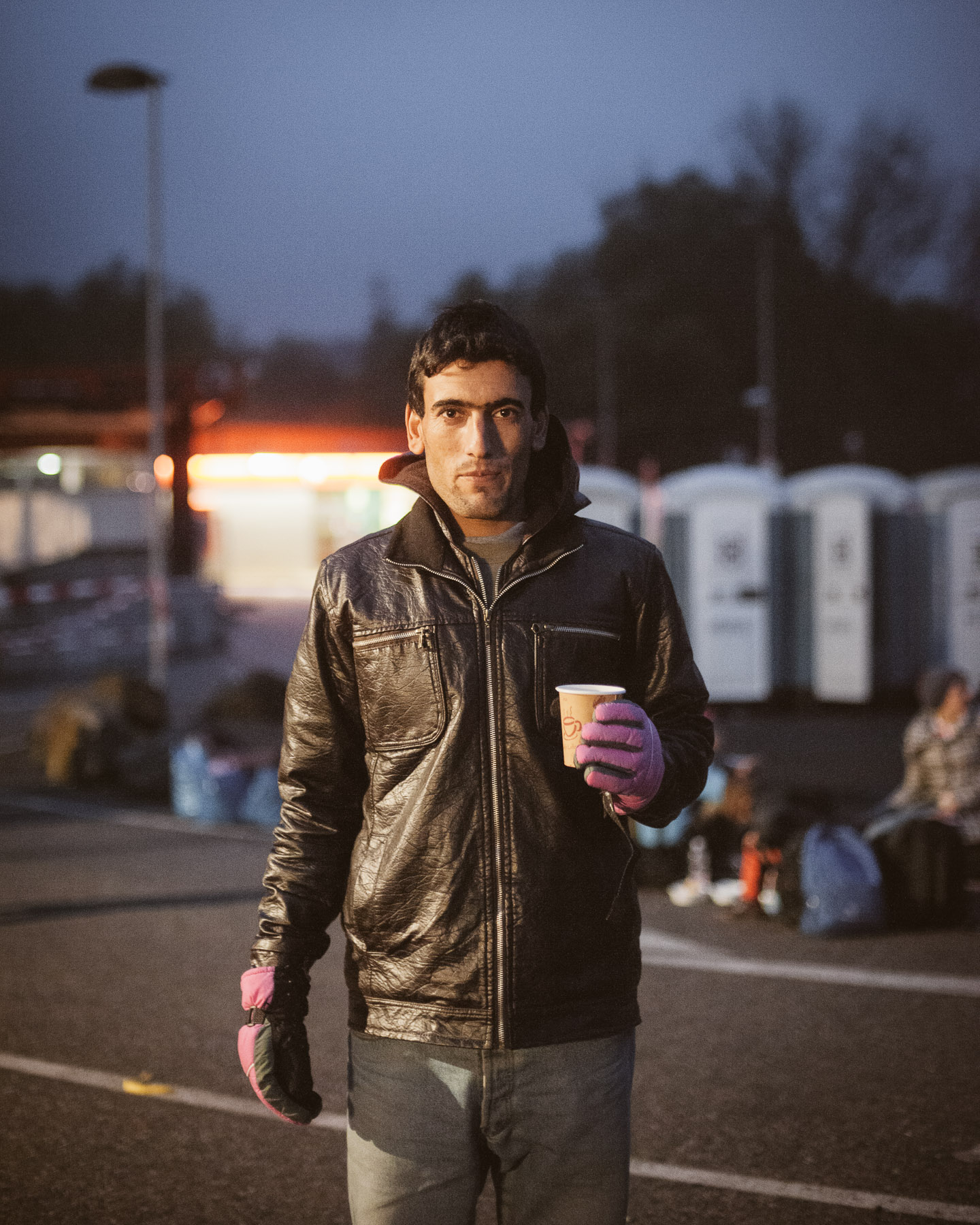 Farid from Iraq near a petrol station close to the border where, during the last days of October, hundreds of people find shelter under its porch; Achleiten border crossing, October 2015. 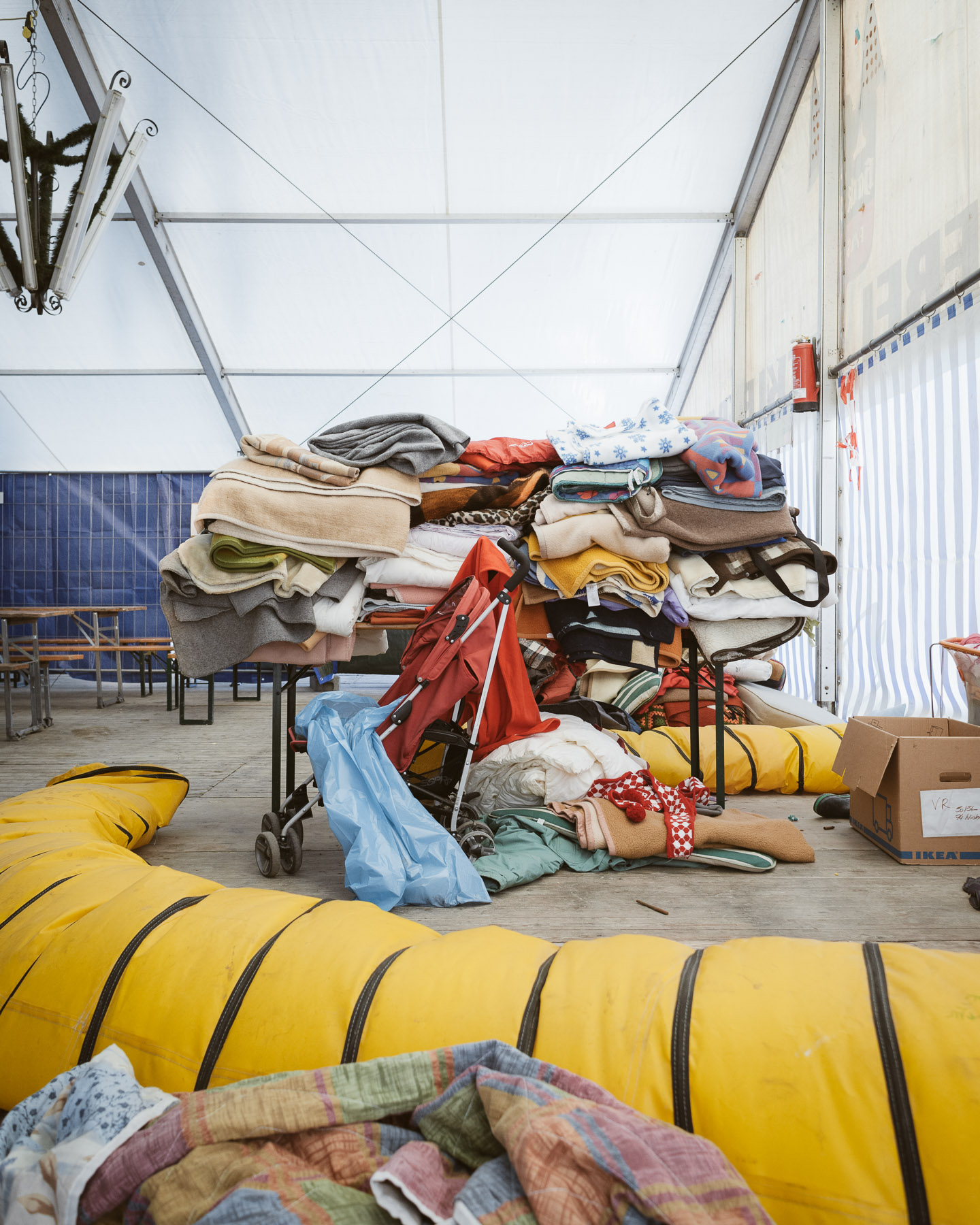 HUMAN BEINGS ARRIVE HERE WHO HAVE BEEN FLEEING FOR DAYS, WEEKS, IF NOT MONTHS, FROM WAR, DEATH AND MISERY. THEY HARDLY SLEPT. AND THEN HERE YOU ARE, AND HUNDREDS OF OTHERS WHO ARE TRYING TO MAKE THESE PEOPLE SOMEHOW, AND AFTER A LONG TIME, FINALLY COME TO REST. YOU GIVE THEM FOOD, DRINK AND CLOTHES AND YOU RECEIVE THE REFUGEES WITH A SMILE AND SAY WELCOME... 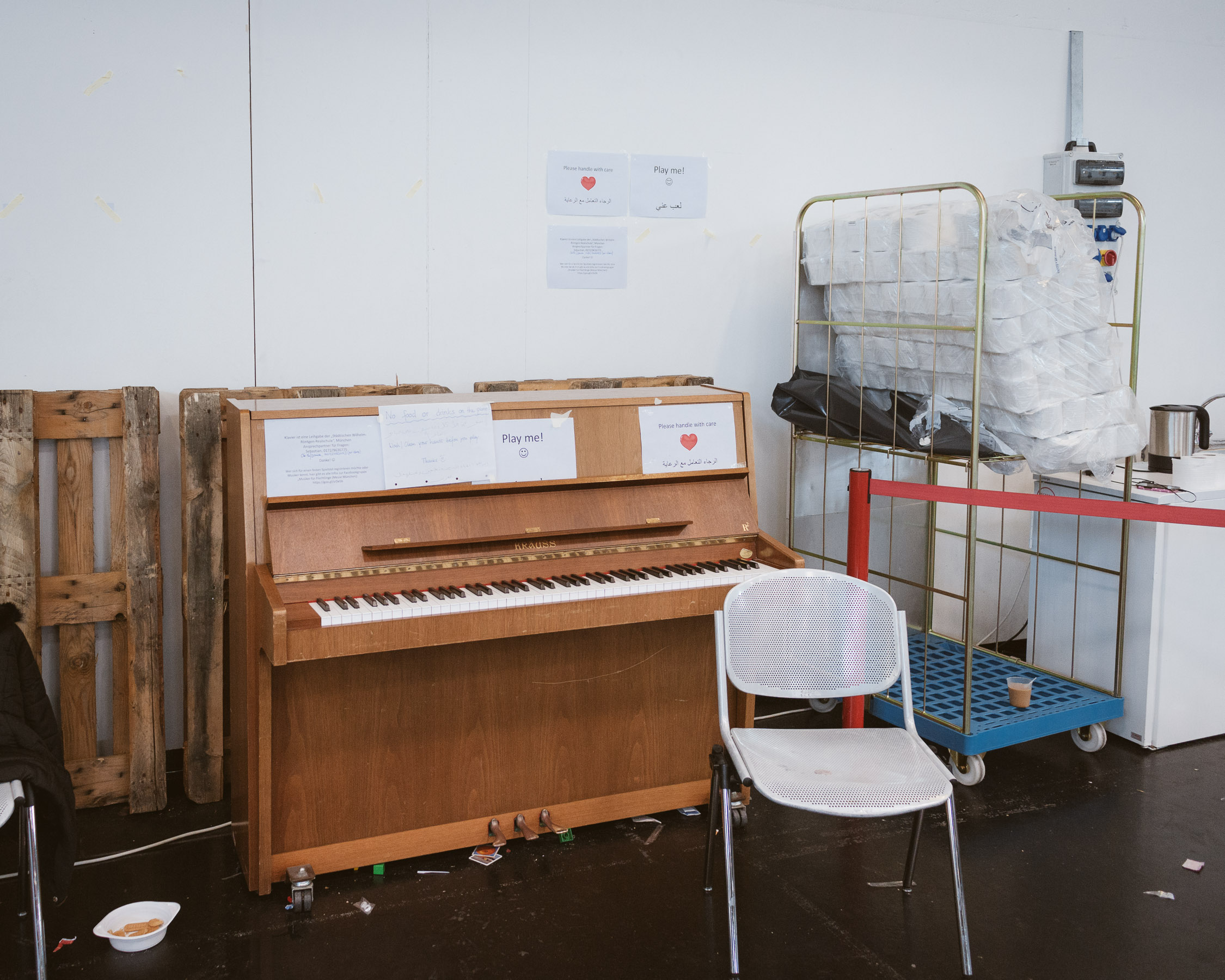 A large temporary emergency shelter at Munich trade fair center Messe Riem provides a piano for to be played by refugees and migrants. The instrument is donated by music teachers on loan from the nearby municipal Wilhelm-Röntgen-secondaryschool; Munich, September 2015. 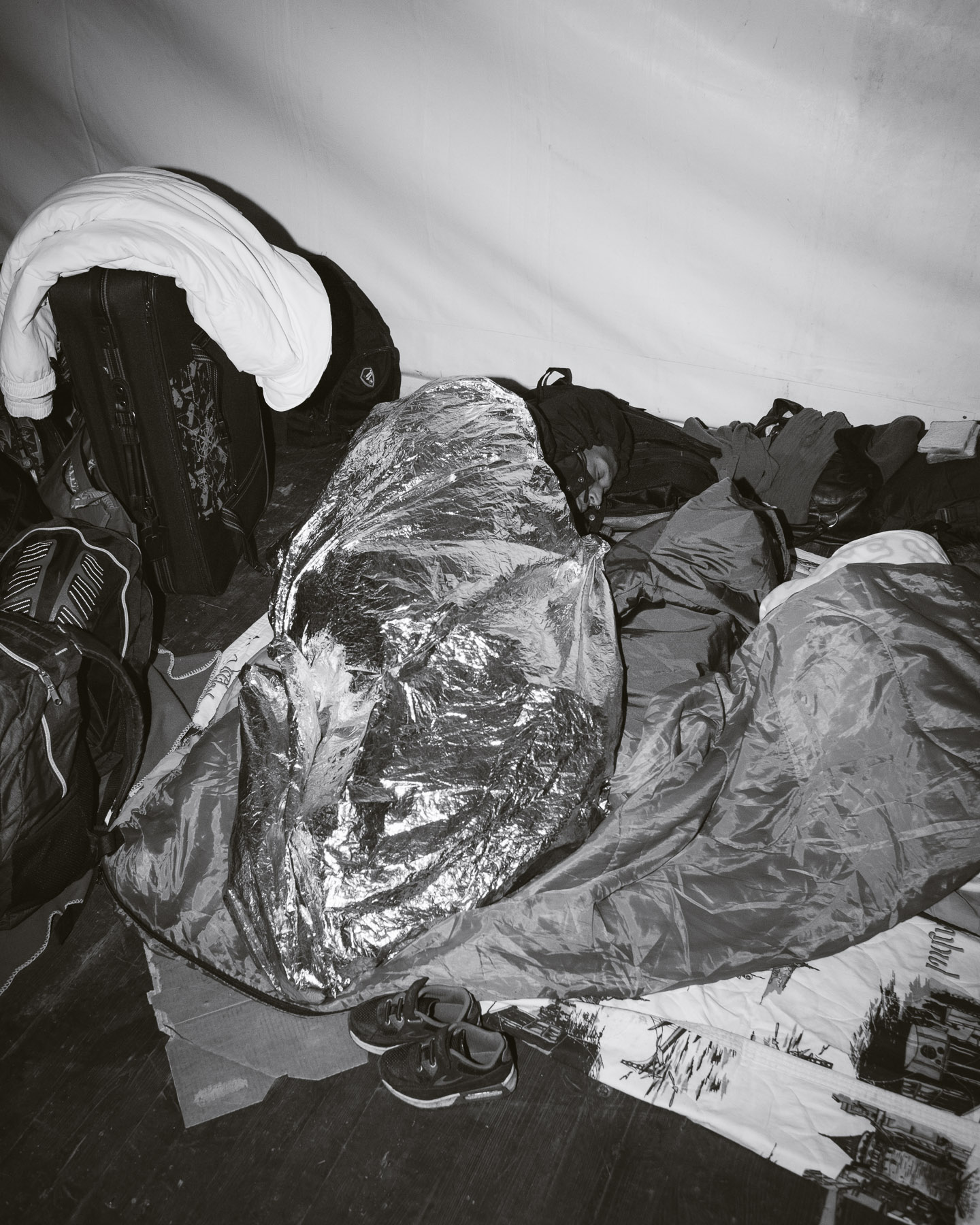 Austrian authorities send up to 50 buses per day to a green border where German authorities try to regain control of the administrative and humanitarian situation. Camps are installed and space blankets provided on the Austrian side as autumn already brings freezing nights; Wegscheid border camp, October 2015. 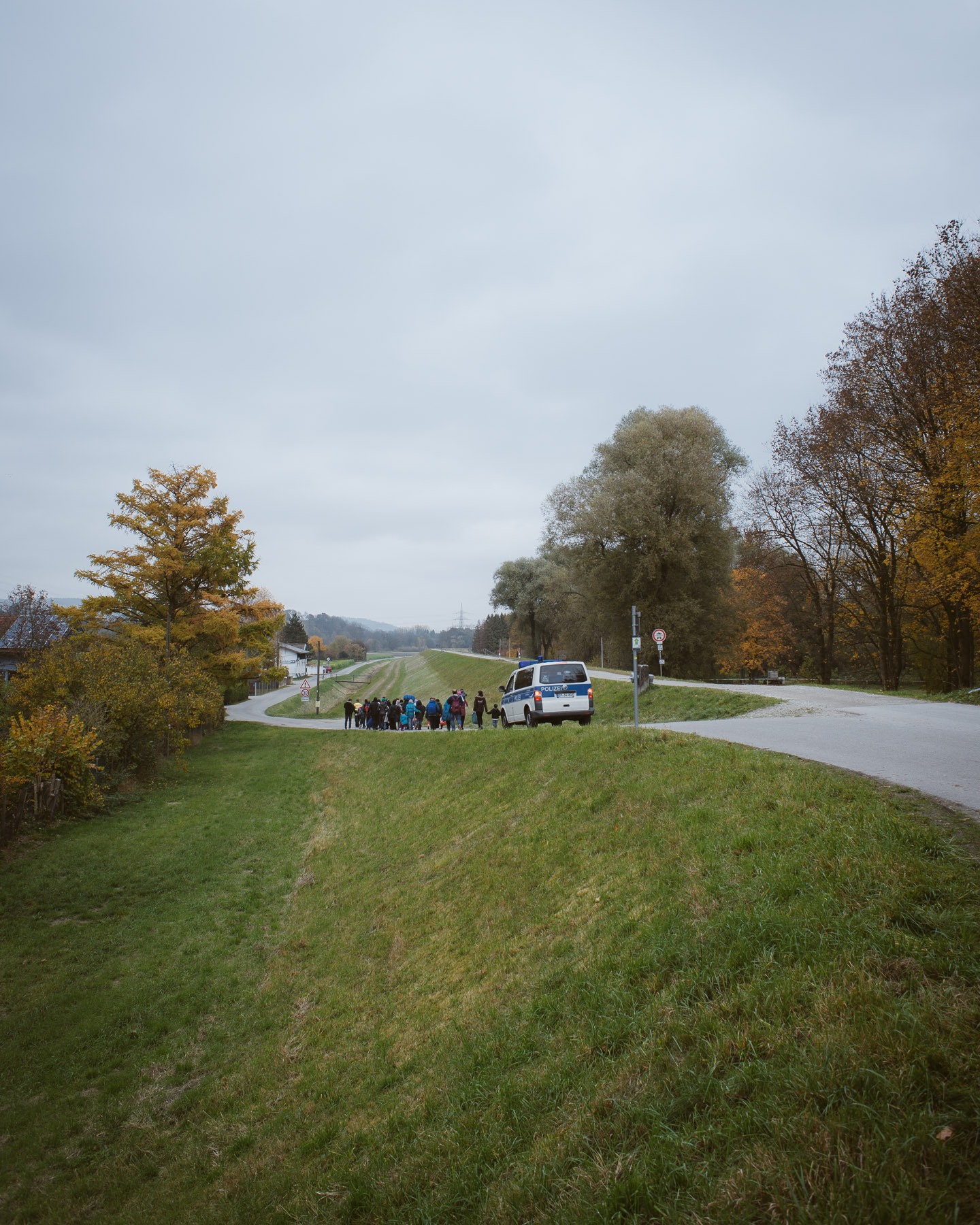 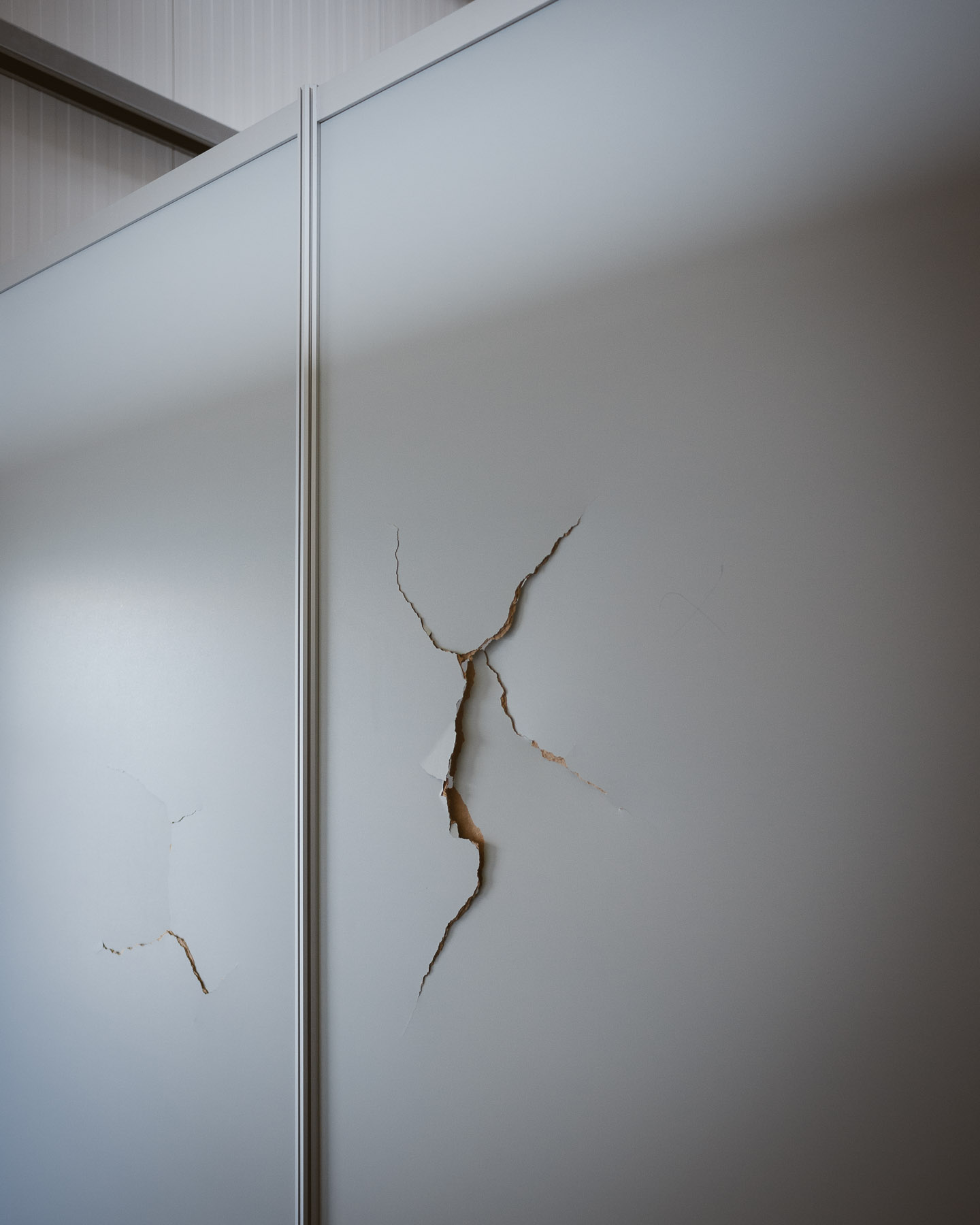 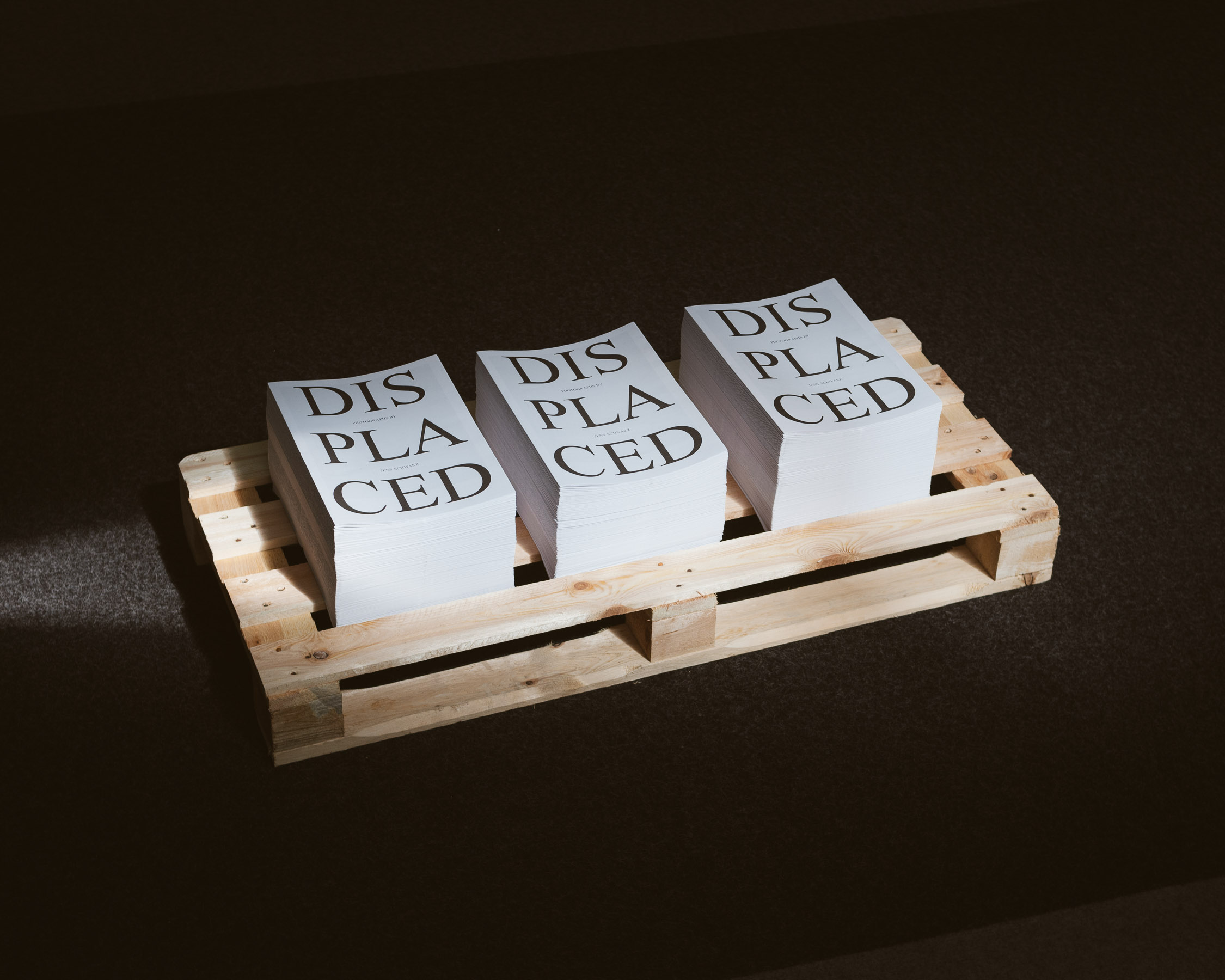 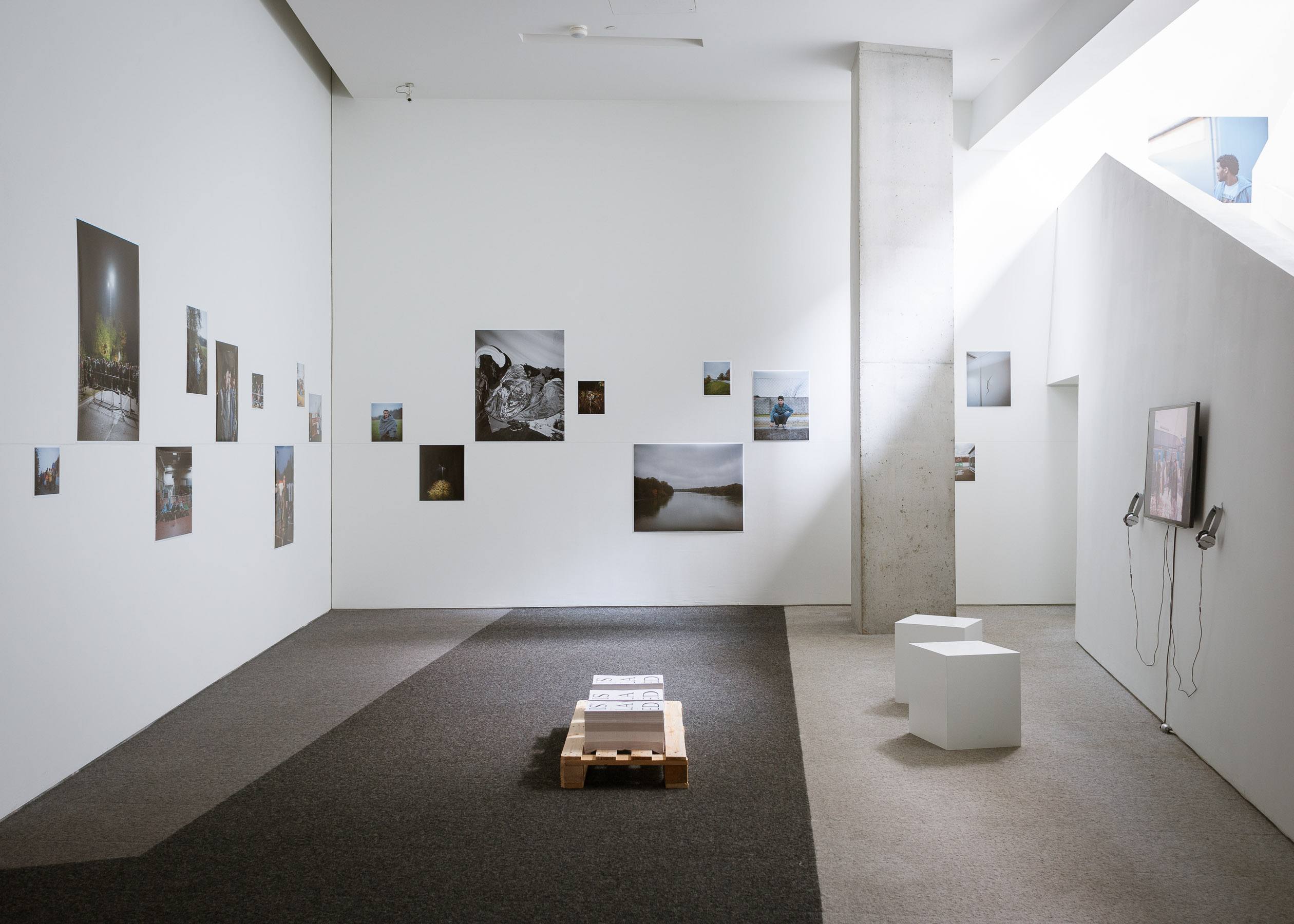 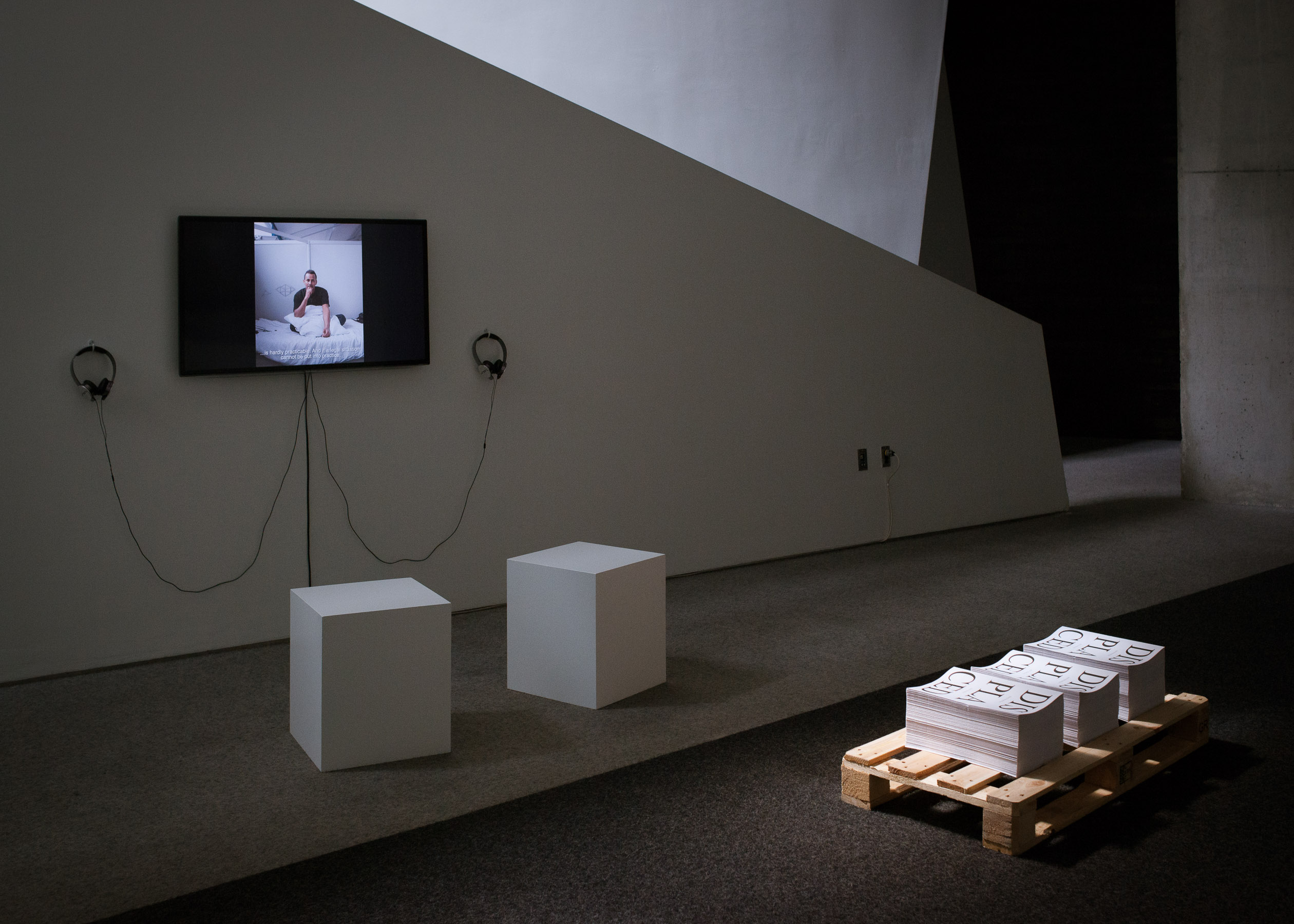